The United Kingdom is home to six types of reptile, and one of these scaly friends is found abundantly in Dane Valley Woods. The common lizard (Zootoca vivipara) is found across most of the country and Dane Valley Woods is ideal habitat for it to thrive.

The common lizard has a great variation in colour but tends to be brownish with spotted and striped patterns, although different colour morphs exist, such as the rare plain morph which has been spotted in the Woods! Common lizards may also be melanistic, which means completely black (but melanistic adults are not to be confused with new-born common lizards which are also totally black). 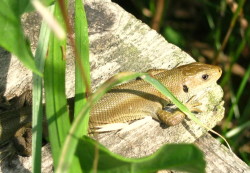 Common lizards are sexually dimorphic meaning males and females look different. A male lizard tends to be ‘spotty’ whilst a female tends to be more ‘stripey’. The sex can be more easily distinguished by their bellies as males have bright orange or yellow bellies covered with black spots, whereas females have plain grey or yellowish bellies with no spots.

Common lizards are also known as viviparous lizards, which means they give birth to live young, unlike many other species of reptile which lay eggs. However, interestingly, populations in warmer climates actually lay eggs and these populations tend not to interbreed successfully with live young laying lizards. A female may give birth from 3 to 11 offspring which are born black with no markings.

The juvenile lizards as well as adult lizards are important prey species, as you may have read in our Kestrel blog, however, they are not easy prey to catch. Reptiles are ‘cold blooded’ so use the sun to warm themselves up and become active, so on hot days common lizards are extremely fast and nimble and catching a sight of them becomes difficult. Common lizards are also competent swimmers and may use this as a means of escaping. However, in extreme cases, a lizard may also shed its tail to escape. The tail remains wriggling to distract the predator, giving the lizard a chance to get to safety.

Whilst this species is widespread, studies have suggested a decline in its numbers and it has recently been added to the UK Biodiversity Action Plan, it is also protected under the Wildlife & Countryside Act 1981.

To read up about this species and other reptiles, visit Kent Reptile and Amphibian Group. 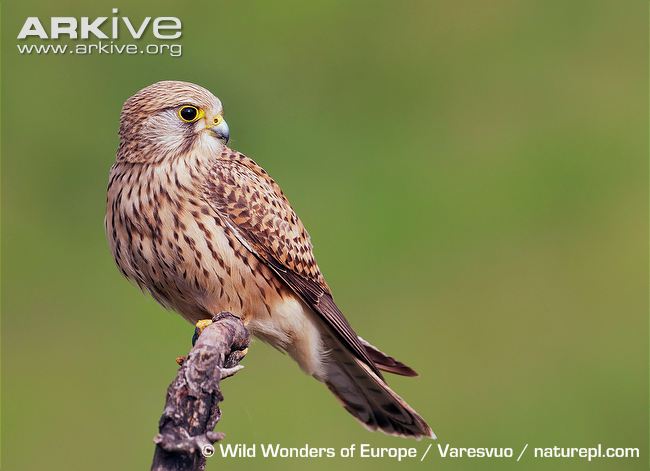 Kestrels (Falco tinniculus) are familiar British falcons, due to their ability to adapt to changing environments and their distinctive flight patterns.

Their sex can be distinguished from their plumage; males tend to have blueish grey hoods and rumps, whereas females are more chestnut brown, however, both have a dark band across their cheeks and speckled brown over their bodies.

Kestrels are notorious for their graceful hunting, hovering motionless in mid-air whilst keeping their heads perfectly still as they search for prey. This has lead to them also being known as wind-hoverers. These falcons fly extremely slowly, spreading their feathers to allow a constant flow of air over their wings as they face into oncoming winds, which generates enough lift for them to hover. To watch the kestrel’s flight and see its extraordinary ability to lock its head perfectly when it hunts watch this clip by Attenborough: http://www.bbc.co.uk/nature/life/Common_Kestrel#p010v3zt

Kestrels usually feed on small mammals (and perhaps in Dane Valley Woods’ case, small lizards, which is rare, but does still occur in Northern latitudes when feeding nestlings) and particularly invertibrates in the Winter. They usually raise 2-3 chicks, although lay 3-6 eggs and they can live for around 16 years. Although they are classified under least concern under IUCN conservation status guidelines, the RSPB lists them as amber species, meaning a moderate decline has occurred in the past, which they attribute to changes in farmings methods since the 1970s.

We are aiming to add a splash of colour to the woods over the next couple of years. Bulbs have already been planted, and we now want to create wildflower meadows, which will also encourage biodiversity and provide habitats for insects and other creatures that live in our woods.

We meet 10am at the Dane Valley Woods HQ in Dane Valley allotments at the end of St Peters Footpath, or come along and find us throughout the morning in the woods  – we are easy to spot in our bright hi-vis jackets.

There is no need to book – we provide all tools and safety equipment, but please wear a sturdy pair of shoes and come dressed for the weather. All ages welcome, under 16s to be accompanied by an adult. Refreshments are provided at the end of the morning for all hard working volunteers.